I received some really helpful feedback on my previous post, where I wondered aloud about the best way to monetize Corgi Corral. As a result, I have a new idea of what I’d like to do.

Basically, I’d like to include some sort of tip jar with two or three price tiers. I would offer 3 levels of the game for free, and any tip given would automatically unlock the rest and also give the player the option to play as a tri-colored corgi: 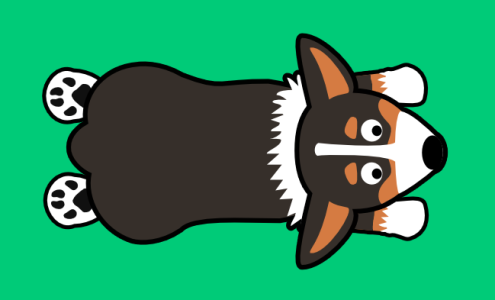 Here’s the tricky part: Consumable in-app purchases cannot be restored. I was curious as to how (Underscore) David Smith got around this problem with his popular fitness app Pedometer++. Pedometer++ features a 3-tiered tip jar that will disable advertisements at any tier. The tips themselves are consumable, meaning you can tip David multiple times for his work on the app. To test his system, I tipped him $1, which removed the ads. I then deleted and re-downloaded Pedometer++ and, as I thought, the ads returned without an option to restore my purchase.

That’s not a big deal for a small inconvenience like banner advertisements (and honestly, I’ll probably just tip David again because he’s awesome). However, in my case, if players pay to unlock all the levels they should really be able to restore that functionality on a new or different device.

This brings me around to a system that more closely resembles what Humble Bundle does: “Pay what you like.” In other words, you choose a one-time purchase price from 3 options, based on…well, the goodness of your heart I guess? It’s an idea that I’ve never seen implemented before in an iOS game and one that I can afford to try.

Setting up in-app purchases sounds like an enormous headache, but I’m actually more concerned about localization and how to word everything. I’m stuck on two things:

And once I figure those two things out…do I dare try to do the translation myself? ?

Anyway, I suppose I’m getting ahead of myself. I have so much more work to do on just finishing all of the art assets that I won’t need to make these decisions for several months, probably!

In case you’re new to my blog: I’m currently in the process of making my first iOS game. It’s short, casual, and is clearly made by a beginner (is that a polite-enough way to say “amateurish?”). I’m hoping to release it sometime this summer and have been thinking a lot about pricing models for iOS games. What follows are some of my loosely-organized thoughts on that subject.

People who like to play short, casual games tend to expect them to be ad-supported, free-to-play, or just plain free. However, the developers that I follow, respect, and want to emulate, tend to express disdain toward those pricing models and prefer to promote games that are paid-up-front. Because of this, I feel torn between a niche group of thoughtful, intelligent iOS gamers whose respect I would love to earn, and the general public who couldn’t care less about the indie games market and just wants free games. And the thing is, I’m just a beginner, which brings me to…

Nobody knows who the heck I am. How could they? I’m not known for anything because I haven’t published anything. I have no fanbase, no credibility, and no experience. If I make my game free with ads and localize it as much as possible, there’s a good chance that it could get quite a few downloads. As someone currently wallowing in obscurity, one of my goals is for as many people to play my game as possible. And if people don’t like it, that’s fine—I can learn from it and move on.

However, if I price it at $0.99, even with the best marketing in the world, there’s a good chance that no one will download it. And if no one downloads it, I’ll never know whether or not they like it. I won’t know how to improve. Most of all—I’ll probably be discouraged from making a second game.

From what I understand, if you undervalue your work, no one is going to take you seriously and if you overvalue your work…well, no one is going to take you seriously then either. Online publications are severely criticized for paying very little (sometimes nothing) to their contributors in exchange for “exposure.” I mostly agree with the criticism; however, I also wonder: is there a point where gaining exposure is worth giving away your work for free? What if that work is your first effort? What’s the best or “proper” way to get noticed? Is there value in just “getting something out there” into the world, even if it’s not the most polished thing ever?

Advertisements make me feel gross. However, I’d like to make at least $50 off of this game, so I guess I can’t afford to be principled? Gosh that sounds horrible. I’m trying to keep it as least-scummy as possible: banner-ads only (no interstitials), never during gameplay, with an option to pay to remove ads. Honestly, it still makes my skin crawl. And I’m also concerned that it may push away one of my target markets: young children. Games with ads are bad for young kids because they touch the ads accidentally and get taken out of the game and don’t understand what happened. I guess I would just encourage parents to pay to remove the ads? That feels kind of scummy too. Or maybe it’s just business. ¯_(ツ)_/¯

It seems like it would be difficult to switch my app from being ad-supported to paid-up-front if I changed my mind down the road (after release). Will the people who paid to remove ads be angry that all of those who didn’t now suddenly have an ad-free experience? I guess the only example I have to go by is that of Overcast. I paid for Overcast’s extra features, which are now free for everyone, and I’m not mad about it. I mean, I suppose someone would be unhappy but maybe it wouldn’t be so bad?

Anyway, the article that got me thinking about all of this is “Indie Developers Have Always Needed to Treat Their Businesses Like Businesses” which is a very good, concise read.

tl;dr: I absolutely believe that indie studios should charge good money for their games and apps. I’m less sure of what solo, hobbyist devs like me should do, especially with our first games…the ones that we’ll look back on someday and think “wow, look how far I’ve come!”